This comparison is shown in the following chart, which shows the impacts in terms of new fleet average CO2 emissions rates in grams per mile (g/mi). The green bar shows the potential decrease in CO2 emissions implied by the rise in EV sales, which amounts to 4.6 g/mi on a fleet average basis over 2012-19. EVs offer only a potential, rather net, CO2 reduction because under the emission standards they are averaged out across the fleet by less efficient vehicles (and that's not even considering the perverse effect of the extra credit EVs get toward meeting the standards). The pink bar is the increase in fleet average emissions due to the shift to light trucks over that same period, which amounts to 21 g/mi. That's over four times greater than the potential reduction due to EVs. 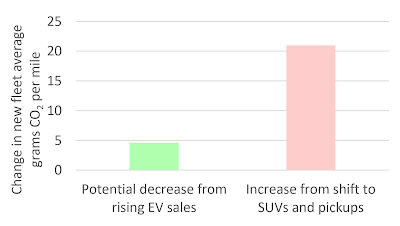 What's the upshot of this comparison? It's not that EVs aren't a great technology. Rather, its that now and for the immediate future, significant reductions in personal vehicle CO2 emissions depend much more on the effectiveness of the clean car standards (GHG emissions regulations and the corresponding CAFE standards) than they do on EV sales. Therefore, additional policy support for EVs in the absence of more stringent clean car standards will not deliver urgently needed CO2 reductions anytime soon.

How this comparison was made

This analysis is based "tailpipe plus upstream" (sometimes called full fuel cycle) GHG emission estimates from the EPA www.FuelEconomy.gov online tool. The year 2012 is used as the basis for comparison because by then the recovery from the 2009 recession was well underway and it was also a key year for EV introductions, including the Tesla Model S, the Prius Prime and the first full year of Chevy Volt among others.

The calculation assumes an EV emission rate of 70 g/mi, which is EPA's estimate for a Tesla Model 3 driven in California; we take that as the typical EV emission rate because it's the most popular EV model and most EV sales have been in California. The emissions estimate would be similar for EVs in the Northeast as well because, like California, that region of the country has a much cleaner-than-average electric grid. We assume that each new EV replaces an average passenger car, rather than the average light-duty vehicle (combined passenger car plus light truck average), similar to earlier findings about EV sales. Scaling this average per-vehicle reduction by the EV market share increase yields a 4.6 g/mi reduction in fleetwide CO2 emissions shown by the green bar in the chart.

Finally, we compute what the overall new fleet average would have been in 2019 if car and truck market shares were the same as they had been in 2012. Adjusting for upstream emissions, the effect of the shift back to light trucks on a new fleet average basis amounts to 21 g/mi, as shown by the pink bar in the chart. That's 4½ greater than the potential CO2 reduction associated with the rise in EV sales to date.