Last fall, I posted an analysis showing that, even as electric vehicle sales had grown significantly over the past several years, the broader market shift to personal trucks (mainly SUVs and pickups) has overwhelmed the potential CO2 reductions from EV use by more than a factor of four. With the new EPA data now released, this ratio has increased to a factor of 5.6, as shown in the chart below.
EPA issued its latest Automotive Trends report in early January. It provides final data for model year 2019, the most recent annual period for which complete official data are available on the sales, CO2 emission rates and fuel economy performance of new light-duty vehicles, including cars, SUVs, pickups, minivans and other vehicles up to 8,500 pounds gross vehicle weight.

The EPA report documents how fleetwide carbon-cutting progress has stalled, with average CO2 emission rates becoming somewhat higher in model year 2019 than they were in 2018. The agency notes that, even though nearly all vehicle types have record low CO2 emission rates, the continuing shift away from cars and towards SUVs and pickups has offset the benefit of such vehicle engineering improvements.

Examining market trends since 2012, which was a significant year for key EV introductions, sales of plug-in cars were up sixfold by 2019. In isolation, that gain would have cut new fleet average CO2 emission rates by 4.7 grams per mile (g/mi). This potential benefit is shown as the light green bar in the figure below. 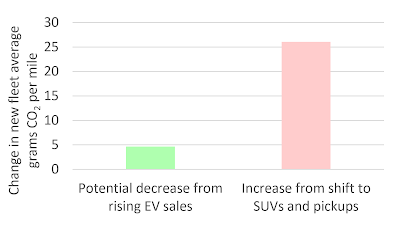 The net effect is that new fleet CO2 emissions averaged 26.1 g/mi higher than they would be without the increased market share of personal light trucks. That's shown as the pink bar in the figure above. Comparing this 26.1 g/mi emission increase to the potential 4.7 g/mi CO2 decrease estimated for EVs yields the factor of 5.6 disparity noted above. (See the earlier post for further details on the assumptions for this analysis.)

In other words, EV sales would have to increase more than five fold just to counteract the carbon reduction deficit that results from the combination of lenient regulation and rising market share for light trucks.

One legacy of the Trump Administration is that clean car standards (the coordinated national program of light-duty vehicle CAFE standards and GHG emission standards) are now slated to tighten only trivially over the next five years. Even though EVs are an important carbon-cutting technology, much more stringent clean car standards are the real priority for putting the U.S. automobile fleet on track for climate protection.

Finally, note that this analysis based on EPA's public data doesn't tell the whole story. The picture would be even worse if we accounted for the largest and most luxurious personal trucks, such as the Chevy Silverado and GM Sierra 2500, Ford F-250 and Ram 2500 models, traditionally called 3/4 ton pickups, as well as 1-ton pickups.

These so-called work trucks are not meaningfully regulated, at least as far as environmental integrity is concerned, and even escape fuel economy and GHG emission labeling requirements. Because EPA does not report their sales and CO2 emission rates, data are not publicly available for estimating their effect on fleetwide emissions. But the popularity of such huge personal vehicles has grown, and so accounting for their impact would mean that the potential benefits of EVs are overwhelmed even more by the broader market trend toward ever more size, muscle and luxury.