Last fall, I posted an analysis showing that, even as electric vehicle sales had grown significantly over the past several years, the broader market shift to personal trucks (mainly SUVs and pickups) has overwhelmed the potential CO2 reductions from EV use by more than a factor of four. With the new EPA data now released, this ratio has increased to a factor of 5.6, as shown in the chart below.
Read more »
Posted by John DeCicco at 8:45 AM No comments:

My opinion piece published in The Detroit News points out the inconsistency of how some automakers have advocated for weaker fuel economy and GHG emission standards even as they promote their technology innovations. Taking General Motors' recent public statements as an example, it reminds readers that what ultimately matters for reducing emissions is the stringency of the regulations that apply across the entire vehicle fleet.

Read more »
Posted by John DeCicco at 1:00 AM No comments:

Read more »
Posted by John DeCicco at 2:44 PM No comments:

One of the reasons why automakers have advocated weaker fuel economy and greenhouse gas (GHG) emission standards is that lower-than-expected fuel prices have lessened consumer interest in higher fuel economy. Although insufficient consumer interest relative to environmental need is the main reason why regulations are needed, lack of consumer interest is a legitimate concern. The challenge is quite real when the market is pulling one way while regulations are pulling another.
Nevertheless, environmental need -- and indeed policy-fostering public sentiment to address global warming -- does not go down when pump prices fall.

It is now well recognized that, to advance electric vehicles, extensive social marketing efforts are needed in addition to incentives, regulations and investments in charging infrastructure. But EVs are a slow slog in terms of market gains and, for cost and convenience reasons, likely to remain so for some time. For at least the next decade, EV promotion is poorly leveraged for reducing emissions at meaningful scales.

Significant emission reductions require fleet-wide gains in fuel economy. Climate concerns dictate that such gains be much greater than those to be seen under the near-flatlining of CAFE standards recently done at the industry's behest.

In spite of this need, no comparable social marketing effort is being directed to encourage consumers to choose more fuel-efficient vehicles whatever the market segment. This void is a missing link in the overall effort to reduce auto sector GHG emissions.

A large number of consumers do have environmental concerns, a fact borne out by numerous surveys in recent years. For example, the University of Michigan Energy Survey found that, since fuel prices fell several years ago, Americans are more concerned about the environmental impact of energy than they are about its cost. But little is being done to tap this sentiment when it comes to car shopping.

In a piece for Automotive News two years ago, I asked "Why aren't automakers connecting better with green-minded consumers?" That question is even more salient today.

Posted by John DeCicco at 12:00 PM No comments:

On Monday March 9, 2020, just before the coronavirus lockdown, I hosted a pre-Earth-Day teach-in on auto efficiency. It was part of the commererative week of action that the University of Michigan had planned to celebrate the 50th anniversary of the first Earth Day, April 22, 1970.

Read more »
Posted by John DeCicco at 7:32 PM No comments: 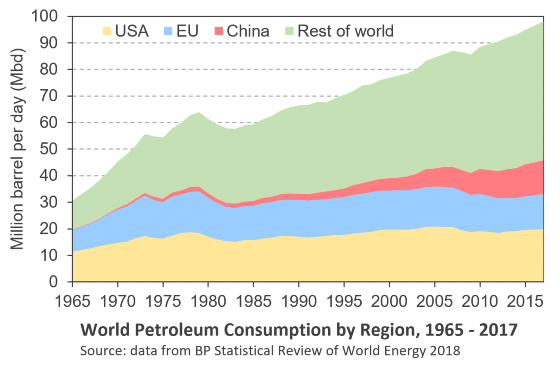 Oil has sustained its energy dominance largely due to its convenience for supplying transportation fuels. Petroleum is largest source of CO2 emissions in the United States and second largest globally. Addressing this part of the climate problem means confronting both the market factors and market actors that determine petroleum supply and demand.
My recent discussion paper examines this intersection of transportation, oil and climate. It traces recent trends affecting petroleum supply and demand, providing a perspective on the industry's interests and how the sector might be affected by potential demand disruptions due to policy changes and innovations in mobility systems. The pertinent aspects of energy policy reflect an ever-evolving political process that attempts to balance competing forces, including the oil industry's desire to maximize income and minimize costs, popular pressures to keep prices low, public sector needs for tax revenue and environmental concerns.
These forces are now amplified by the pace of innovation. Impacts were seen first on the supply side through developments such as fracking. Next up are changes on the demand side, including new mobility options such as ridehailing, vehicle electrification and rising levels of vehicle automation. Although it is unclear whether such changes will be evolutionary or revolutionary, their net long-run effect is likely to be increased demand for mobility. Policies to address the climate concern seek to decouple transportation from oil, creating a petroleum demand destruction risk that the industry can be expected to resist.
Read the full analysis at:
DeCicco, J.M. 2019. Market Factors Related to Transportation, Oil and Climate. Discussion Paper. Ann Arbor: University of Michigan Energy Institute. January. https://bit.ly/mktftoc19

Posted by John DeCicco at 1:00 PM No comments:

Can the Trump administration pull off a clean car deal after all?

Regulations have long been a bone of contention between automakers and green groups, with policymakers caught in the middle. The disagreements have grown sharper than ever over the past two years, culminating in an August proposal from the Trump administration. That plan detailed a preferred option of freezing car and light truck Corporate Average Fuel Economy (CAFE) and greenhouse gas (GHG) emission standards after 2020.

In response -- and they were indeed prepared for this worst-case scenario -- the State of California and its allies have girded for legal battle. They filled the docket with comments and extensive supporting analysis designed to fight the administration's crippled standards in court. On the other side, automakers -- who had prompted the administration to revise the regulations -- hailed the Trump agencies regulatory reform process even though they said it weakened the rules even more than they wanted. At that juncture, it seemed like years of litigation might be inevitable.

Nevertheless, a look at the formal comments filed reveals the makings of a compromise peeking through the otherwise disparate views. Recent news stories report that serious negotiations between California and the Trump administration seem to be underway. My recent Axios piece muses about how a compromise on car standards could be in sight.

Posted by John DeCicco at 11:42 AM No comments:

Pondering the future of the car with the planet in mind

This year, the Society of Environmental Journalists' (SEJ) Annual Conference was held in Flint, Michigan. The city has been in the news recently because of its toxic, lead-contaminated tap water, a public health crisis brought on by negligence and indifference at all levels of government. Clean water was a major theme of the event, which included moving presentations by members of the community, activists and researchers involved in the crisis.

Historically, however, Flint is one of the cities that gave birth to the automobile. William Durant, a key co-founder of General Motors, and his partner Josiah Dort opened a factory for making horse-drawn carriages there in 1886. That building subsequently became an early factory for Durant's car company before falling into disuse in 1924. Five years ago, General Motors purchased the building and named it Factory One, turning the refurbished structure into a museum and event space.

This location served as a fitting venue for an evening plenary on the Future of Cars held on October 3, 2018, the first day of the SEJ conference. Moderated by Jim Motavalli, the panel included Michelle Krebs, a leading automotive analyst, Mike Ableson, a GM vice president involved in the company's electric vehicle efforts, and myself.

Read more »
Posted by John DeCicco at 4:19 PM No comments:


Protecting the Earth's climate takes on greater urgency every day. The vast majority of carbon dioxide (CO2) and other climate-wrecking greenhouse gas (GHG) emissions comes from the unmitigated use of fossil fuels. But that doesn't mean that every form of alternative energy is helpful for the planet. Case in point: bioenergy, such as liquid biofuels to replace oil or forest products to replace coal.

Indeed, using biomass for energy at large scales does not belong on the short list of actions to take for climate protection. This is the conclusion of a commentary by Bill Schlesinger and myself just published in the Proceedings of the National Academy of Sciences. Given the real-world limitations of not only technology but also land-use governance, we argue that the priority policymakers have given to promoting bioenergy is profoundly misplaced.

Read more »
Posted by John DeCicco at 5:00 AM No comments: