Can the Trump administration pull off a clean car deal after all?

Regulations have long been a bone of contention between automakers and green groups, with policymakers caught in the middle. The disagreements have grown sharper than ever over the past two years, culminating in an August proposal from the Trump administration. That plan detailed a preferred option of freezing car and light truck Corporate Average Fuel Economy (CAFE) and greenhouse gas (GHG) emission standards after 2020.

In response -- and they were indeed prepared for this worst-case scenario -- the State of California and its allies have girded for legal battle. They filled the docket with comments and extensive supporting analysis designed to fight the administration's crippled standards in court. On the other side, automakers -- who had prompted the administration to revise the regulations -- hailed the Trump agencies regulatory reform process even though they said it weakened the rules even more than they wanted. At that juncture, it seemed like years of litigation might be inevitable.

Nevertheless, a look at the formal comments filed reveals the makings of a compromise peeking through the otherwise disparate views. Recent news stories report that serious negotiations between California and the Trump administration seem to be underway. My recent Axios piece muses about how a compromise on car standards could be in sight.

Posted by John DeCicco at 11:42 AM No comments:

Pondering the future of the car with the planet in mind

This year, the Society of Environmental Journalists' (SEJ) Annual Conference was held in Flint, Michigan. The city has been in the news recently because of its toxic, lead-contaminated tap water, a public health crisis brought on by negligence and indifference at all levels of government. Clean water was a major theme of the event, which included moving presentations by members of the community, activists and researchers involved in the crisis.

Historically, however, Flint is one of the cities that gave birth to the automobile. William Durant, a key co-founder of General Motors, and his partner Josiah Dort opened a factory for making horse-drawn carriages there in 1886. That building subsequently became an early factory for Durant's car company before falling into disuse in 1924. Five years ago, General Motors purchased the building and named it Factory One, turning the refurbished structure into a museum and event space.

This location served as a fitting venue for an evening plenary on the Future of Cars held on October 3, 2018, the first day of the SEJ conference. Moderated by Jim Motavalli, the panel included Michelle Krebs, a leading automotive analyst, Mike Ableson, a GM vice president involved in the company's electric vehicle efforts, and myself.

Read more »
Posted by John DeCicco at 4:19 PM No comments:


Protecting the Earth's climate takes on greater urgency every day. The vast majority of carbon dioxide (CO2) and other climate-wrecking greenhouse gas (GHG) emissions comes from the unmitigated use of fossil fuels. But that doesn't mean that every form of alternative energy is helpful for the planet. Case in point: bioenergy, such as liquid biofuels to replace oil or forest products to replace coal.

Indeed, using biomass for energy at large scales does not belong on the short list of actions to take for climate protection. This is the conclusion of a commentary by Bill Schlesinger and myself just published in the Proceedings of the National Academy of Sciences. Given the real-world limitations of not only technology but also land-use governance, we argue that the priority policymakers have given to promoting bioenergy is profoundly misplaced.

Read more »
Posted by John DeCicco at 5:00 AM No comments:

No justification for weaker CAFE standards


This week the administration is holding public hearings on their proposal to weaken Corporate Average Fuel Economy (CAFE) standards after 2020. What follows is the comment I prepared for the hearing being held today in Dearborn, Michigan.

Thank you for the opportunity to present this comment today.

Having reviewed the proposed rule, I find that it fails to scientifically or economically justify freezing the standards for model years 2021 through 2026. My assessments show that the greenhouse gas emissions and fuel economy standards for those years remain sound.

My overarching conclusion is that there is no justification for changing the standards.

The one new development with any significance is that fuel prices are lower now than projected. However, this does not justify weakening the standards. Lower prices are all the more reason why fuel economy and emission standards should remain untouched.

Read more »
Posted by John DeCicco at 6:00 AM No comments:

Any day now, the Trump Administration will formally propose its revisions to the coordinated program of Corporate Average Fuel Economy (CAFE) and greenhouse gas (GHG) emission standards for cars and light trucks. EPA Administrator Scott Pruitt has determined that the existing standards, set in GHG terms by the previous administration for model years 2021-25, are too tough. Everyone expects that the proposal will weaken the regulations; the question is by how much.

As a long-time analyst of automotive fuel economy policy, over the past few weeks I've written several pieces providing perspectives on the issue as linked here.

Even though it's not a good reason to weaken the standards, automakers do have a valid concern about low consumer interest in ever-higher fuel economy. The tension between what consumers desire and the need to cut GHG emissions is a problem to take seriously and address creatively. This challenge is discussed in my recent piece "Why aren't automakers connecting better with green-minded consumers?" in Automotive News.

A broader look at the regulatory dispute is given the piece, "After Years of Green Promises, Automakers Renege on Emissions Standards," published last week by Yale Environment 360. Hooking to visionary-sounding statements by GM's chief executive, it highlights the contrast between the automaker's promise of technological solutions and the efforts to fight the policies needed to bring such solutions to fruition. That's an old story in the long-running debates about clean cars. However, with automakers now able to exploit the empowered political hostility to the environment that they (and some other industries) cultivated over the years, progress may soon grind to a halt. My comments echo those of others who point out California's crucial leverage on the issue.

A concise take on this very point is given by my Axios Expert Voices piece, "Automakers struggle to head off the California–EPA legal battle," published earlier last week.

A couple of months back, shortly after Administrator Pruitt issued his notice about the process to revisit the CAFE and GHG emissions standards, I argued that "Stronger fuel standards make sense, even when gas prices are low" in The Conversation (and also republished by Salon and other outlets).

Read more »
Posted by John DeCicco at 9:00 AM No comments: 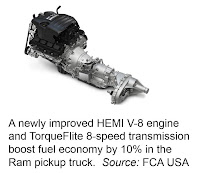 The current Republican administration is taking steps to weaken EPA's greenhouse gas (GHG) emission standards for cars and light trucks. One of the stated reasons is that lower fuel prices make it more difficult for automakers to comply with the regulations. However, car companies are already well on the way to re-engineering their vehicles to cut emissions through higher fuel economy. Fuel prices are a fickle friend when it comes to the crucial long-term quest to cut climate-disrupting GHG emissions. So that's all the more reason to keep strong standards in place, as explained in this recent piece published on The Conversation.
Posted by John DeCicco at 7:32 AM No comments:

Biofuels vs. Biodiversity and the Need to Think Beyond Carbon Neutral

Seminar given at the University of Michigan, Thursday, February 8, 2018, as part of the 2016-2018 "Beyond Carbon Neutral" seminar series.

Just over a decade ago, policymakers gave a big boost to biofuels through the Renewable Fuel Standard (RFS) and similar policies. These policies included sustainability provisions for protecting sensitive lands; the intent was to spur the production of advanced biofuels that would be sustainable in many ways including low CO2 emissions. Now, new studies appear each year revealing the destruction of diverse habitats as biofuel production amplifies the global demand for land. There have also been multiple bankruptcies of highly-subsidized advanced biofuel operations. What went wrong and how can we find a better path forward?

Read more »
Posted by John DeCicco at 5:54 PM No comments: