Carbon taxes and the affordability of gasoline

Although new taxes can seem like a third rail in American politics, taxing carbon seems to be an approach that is slowly gaining ground in public discussions of ways to tackle global warming.

We recently explored what a carbon tax would mean for how U.S. consumers feel about the affordability of gasoline. It turns out that for over 90% of Americans, a $40 per ton carbon tax -- which translates to an extra 36 cents per gallon -- would still leave them a gasoline price range that they consider affordable.

Of course, consumers' views on the issue depend on their household incomes, with lower income households expressing a lower price threshold for "pain at the pump," so to speak.

Further details on these survey findings can be found in the article on "A carbon tax: how much would be too much?" at the University of Michigan Energy Survey website, where the full report is also posted.

Posted by John DeCicco at 1:00 PM No comments:

A new and deeper wrinkle in the biofuel debate

Two short articles just published by the journal Climatic Change highlight the divide in scientific thinking about the effect of biofuels on CO2 emissions. A commentary by Robb De Kleine and colleagues at Ford Motor Company criticizes a paper on the topic published last year by myself and colleagues at the University of Michigan. My response to their commentary explains why I believe that our approach is correct, in contrast to the established lifecycle analysis method that our critics say is the best way to address the question.

This quarrel reflects a new stage in the long-running debate because it does not involve disputes about net energy use or even the food-versus-fuel and land-use change issues raised over the past decade. It is instead a disagreement about the core assumptions to use when examining the question, particularly whether or not biofuels should be treated as inherently carbon neutral. That's the assumption that the CO2 emitted when biofuels are burned does not count because it is biogenic, i.e., newly removed from the atmosphere when feedstocks are grown. My work challenges this assumption, showing that it only holds under certain conditions. De Kleine and colleagues defend the assumption, arguing that it is true unconditionally.

The disagreement is not merely academic. Because new oil production technologies have expanded the supply of economically attractive fossil-based liquid fuels, the business case for biofuels rests increasingly on their value for mitigating CO2 emissions. The stakes are high for both the biofuels industry and for policies to address global warming.

Read more »
Posted by John DeCicco at 6:36 AM No comments: 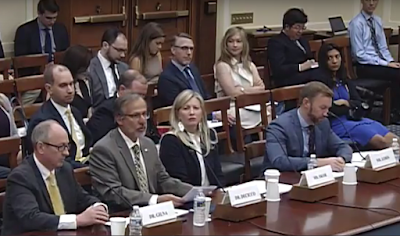 John DeCicco speaking before the U.S. House of Representatives Committee on Science, Space and Technology, where the Subcommittees on the Environment and on Energy held a joint hearing entitled "Examining Advancements in Biofuels: Balancing Federal Research and Market Innovation" on Tuesday, July 25, 2017. What follows is the statement delivered at the hearing.

I wish to thank the chairs, ranking members and other members of the Committee and Subcommittees for the opportunity to testify.
The question being addressed today, that of the right balance between fundamental scientific research and government intervention in the marketplace, is crucially important. The focus on biofuels is telling because it involves so many aspects of the question. Indeed, federal biofuels policy provides a morality tale of how things go wrong when the right balance is not maintained.
Before delving into the problems, however, I want to emphasize the importance of maintaining a robust federal investment in research across all fields of study. Funding for science is crucial to maintain American leadership and foster the innovation that leads to high-quality job growth. Federal support for university research is especially crucial for training a new generation of Americans who can fill those jobs.

Read more »
Posted by John DeCicco at 9:18 PM No comments:

Last week, President Trump worked long-time big-business lobbying scripts about "job-killing regulations" into his populist speech here in Michigan. The setting was the Willow Run facility in Ypsilanti and the props included a crowd of Chrysler, Ford and General Motors auto workers bussed in by the former Big Three to cheer for the Donald.

In reality, environmental regulations do not kill jobs. Read a rebuttal to the speech in my article on the "The ‘Job-Killing’ Fiction Behind Trump’s Retreat on Fuel Economy Standards" at Yale's e360 online magazine.

Posted by John DeCicco at 8:00 AM No comments:

The past few days found me at this year's Climate Leadership Conference in Chicago, where I moderated a panel session entitled "Employing The Next Generation of Clean Fuels." This annual event brings together a diverse set of private companies who are pursuing strategies to reduce greenhouse gas (GHG) emissions with partners in nonprofit and government sectors.

The clean fuels panel was framed around the fact that transportation is now the nation's highest emitting sector in terms of greenhouse gases. It addressed how adopting alternative fuels or expanded electrification can reduce the GHG emissions stemming from personal and business travel. The other panelists were Rebecca Boudreaux of Oberon Fuels, a company that produces dimethyl ether (DME); Jon Coleman of Ford Motor Company; Angela Foster-Rice of United Airlines; and Ed Harte of Southern California Gas.

Most panelists focused on the opportunities and challenges associated with the particular fuel options they are pursuing. Both natural gas and DME are being targeted to replace petroleum-based diesel fuel in commercial vehicles. Airlines such as United have been testing biofuels, which have a significant role in the industry's international plan to avoid further growth in GHG emissions from air travel after the year 2020. As a manufacturer of vehicles for utilizing all of the major alternative fuels, Ford highlighted the need to carefully analyze the many factors that influence whether and to what extent a given alternative fuel might be adopted.

Not surprisingly, I sounded a note of caution about clean fuels and climate.

Read more »
Posted by John DeCicco at 9:55 AM No comments: 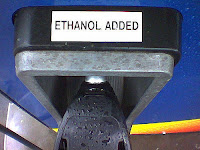 
Posted by John DeCicco at 7:07 AM No comments:

Debates about the merits of biofuels have been going on for at least a generation. My favorite clip from the early, oil-crisis era ethanol push was Nicholas Wade’s article, "Oil pinch stirs dreams of moonshine travel," published by Science in June 1979. Save for one topic, the terms of the debate — the costs of producing biofuels, whether ethanol took more energy to make than it delivered, the extent to which it really helps energy security, the hope for cellulosic biofuels and the food-versus-fuel dilemma — were the same nearly forty years ago as they are today.

Global warming is the topic not on the table then that is so important now. The effect of biofuels on greenhouse gas (GHG) emissions is the focus of many recent studies. To compare fuels according to their GHG impact, policymakers have adopted a form of computer modeling known as lifecycle analysis (LCA). A new report from the U.S. Department of Agriculture (USDA) is the latest LCA study to claim significant GHG reductions from the use of corn-based ethanol, concluding that it has net GHG emissions 43 percent lower than those of petroleum gasoline. Those results are similar to the findings of lifecycle modeling from Argonne National Laboratory (ANL), on which this latest USDA study heavily relies.

My own work has long come to an opposite conclusion. It shows that the use of biofuels (both ethanol and biodiesel) makes GHG emissions worse that they would otherwise be. This finding is not based on computer modeling, but relies instead on field data to assess the real-world CO2 flows involved when substituting biofuel for fossil fuel.

Read more »
Posted by John DeCicco at 1:00 PM No comments: